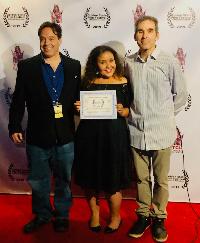 Writing, directing and starring in ELEVATE, Matemotja delivers a drama of intertwining stories about people who must fight to overcome their struggles with homophobia, food addiction and racism. Matemotja shares, “Winning Best Inspirational Feature is such an honor and is in complete alignment with my mission: creating a cinematic culture of compassion, one story at a time. Thank you Peter Greene and Jon Gursha for this wonderful accolade.”

On April 20th, ELEVATE will screen as the final Official Selection at The Women’s International Film Festival San Diego. Hosted by the Women’s Museum of California, the festival provides female storytellers a platform to share their work and connect with each other amongst a uniquely supportive audience.

Matemotja shares, “I am so touched that we are the final screening and only feature film playing at this special festival. This is a true honor and I can’t wait to view and discuss ELEVATE with other women considering our film was written, produced, directed, scored and stars mostly women. This is more than I could have ever hoped for.”

The film has been gaining momentum with international audiences as well, screening most recently in South Africa on International Womens’ Day, where during a robust panel one audience member asked Matemotja: Did you know about the #MeToo movement at the time you were filming?

Earlier this year, Matemotja earned the ‘Best Director’ award at the U.K.’s LGBTQ focused Rainbow Umbrella Film Festival and the ‘Female Pioneer Award’ at the Downtown Los Angeles Film Festival in Los Angeles. Prior to this, the film earned an Award of Merit for Best Feature Film and Best Actress in a Leading Role (Matemotja) from the Accolade Global Film Competition.

ELEVATE delivers a drama of intertwining stories about people who must fight to overcome their struggles with homophobia, food addiction and racism. The story follows Trina, an overweight elevator switchboard operator who desperately tries to accomplish just one day of healthy eating. Overwhelmed by her abusive boss and by the trapped elevator occupants that reach out to her for help, her fitness guru provides the inspiration and escape that she craves – or does she? Ultimately, all of the occupants in this trapped world find themselves caught face-to-face with their inner demons.

The film also stars Brianna Brown (CW’S Dynasty), Kit Williamson (creator/star of award-winning and Emmy nominated LGBTQ series Eastsiders), Alexis Carra (Latina star of ABC’s Mixology) and Matemotja (Tyler Perry’s Single Mom’s Club). To produce the film, Matemotja turned to Dele Ogundiran, who is also African, and Brown, who is the CEO of the non-profit The New Hollywood, which is dedicated to supporting socially conscious storytellers and change makers.

For more about ELEVATE visit: ElevateFilm.com