Empire Heating and Air Conditioning proudly celebrates its 34th Year in Business since its founding in 1985. 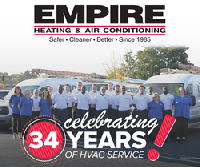 Empire Heating and Air Conditioning proudly celebrates the company’s 34th Anniversary since its founding in 1985. Martin and Gila Hoover started Empire in the “old Austin Carwash” building in downtown Decatur moving to the current location at 783 DeKalb Industrial Boulevard in 1990.

Empire enjoyed great growth serving the “In The Perimeter” homes and businesses for many years primarily by recommendations to friends and family. In 2001 Empire began expanding their service territory north and east. Empire heating and air conditioning’s service territory now includes the majority of DeKalb, Fulton, Forsyth and Gwinnett counties.

“Empire was founded on simple core principles to treat our customers as we would like to be treated, to deliver superior service by skilled tradespeople and provide fair up front simple pricing,” states Gila Hoover.

Founded on honesty and character, the company still holds true to these principles.

Empire Heating and Air Conditioning is known for their fast, friendly, and professional services and works daily to do so. In trying to better meet this goal, the company has made some changes to their website featuring new images and a more user-friendly site navigation. Many services are now categorized under Air Conditioning or Heating so users can easily find the service they need.

In addition to the company’s 34th Anniversary, the Empire Team is celebrating the recognition of several new awards, including the 2018 Intown Readers’ Choice Award and their 14th consecutive year receiving the Angie’s List Super Service Award.

“The one thing that sets us apart is our people. We have an awesome team of technicians, installers, dispatchers, managers and associates that work hard to do what it takes to get the job done. Our senior technicians are NATE certified, and many are also NCI and DET certified to deliver the best possible service,” exclaims Hoover.

Empire holds Georgia licenses for Electrical, Conditioned Air and Plumbing along with many certifications.

As a leading heating and air company in Atlanta, Empire Heating and Air Conditioning provides 15 different specialized services ranging from equipment replacement to indoor air quality testing and ductless split air conditioning and heat pumps. The company is an active member of multiple top-level associations, such as Air Conditioning Contractors of America, Conditioned Air Association of Georgia, PHCC, and more.

“Gila and I would like to take a moment and thank our customers for their continued support over the years,” states Martin Hoover, Empire Heating and Air Conditioning owner. “Whether we worked together just once or multiple times, every customer is important to us and has helped us reach this special milestone.”

“We always try to make our services affordable, as we understand sometimes heating or air issues arise at the most inconvenient times,” Hoover says.

On the website, viewers can find several HVAC coupons and financing options. The company is currently running specials for an Air Conditioning Tune Up and well as several rebate and special financing offers for Daikin and American Standard heating and cooling products.

For more information on Empire Heating and Air Conditioning or their HVAC services, visit https://empirehvac.com/ or call 404-294-0900.