In-demand Australian actor and celebrity auctioneer, James Pratt has been asked by iTalk to be a keynote speaker at their next event in Los Angeles, "iTalk LA. This is the first time an Australian has been asked to be a part of the world-renowned events, and if James accepts he will join the best in USA Film and Television including Sean Stone, Ali Levine and MTV's, Chanel West Coast all of whom are confirmed. 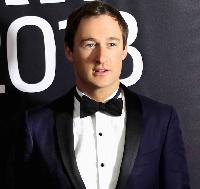 Leadership Content, Pop Culture and Stage Drama collide this July 12th in Los Angeles, when iTalk LA holds its next leadership event at the former estate of Frank Sinatra. The world-renowned iTalk events confirmed they have asked in-demand Australian actor and celebrity auctioneer James Pratt to join the star-studded line up of speakers this July in Los Angeles. This is the first time an Australian talent has been asked to speak at iTalk. Pratt who is fast building an esteemed reputation internationally has impressed iTalk in the past with his skillset, and if he confirms, he will be join the best across USA Film, Television and Fashion including Sean Stone, film actor and son of the legendary film maker Oliver Stone, celebrity stylist Ali Levine, MTV’s Chanel West Coast, and Frank Knuckles former percussionist for The Roots and The Late Night Show with Jimmy Fallon, all whom will be showcasing specific leadership advice aimed at inspiring the next generation of pioneers

Motivational Leadership events are growing rapidly in popularity, but with this growth also comes higher expectations from the audience according to Jen Montague, co-founder and Sr. Director of ITalk, and who’s worked hard at making sure her events are keeping up with the progressive trends.

One of the biggest challenges right now is to build events that satisfy the moment-by-moment engagement that audiences are craving and not just millennial audiences but audiences of all ages. Content has to grip them, keep them, and provide them an opportunity to participate, to party, to network and so much more. The content has to be engaging enough for them to then share it online and on social media with their own followers. In other words, it’s about the experience said Jen Montague Director of ITalk, who enjoys merging her music conservatory and theatre roots with her corporate leadership and human resources professional experience. The infusion of pop culture is another unique facet of the platform, keeping audiences engaged. We’re pushing leadership and pop culture forward with iTalk said the world acclaimed International DJ Casper, Co-Founder and Director of Music for iTalk and DJ for “super producer,” Rodney Jerkins.

In April iTalk Philadelphia featured speakers such as, Meisha Johnson (CBS Anchor) Stephen Hoelper, Vice President of Product, Comcast NBCUniversal and Desiree Rogers –former CEO of Johnson Publishing, LLC and former Social Secretary for Barack Obama’s Administration. But it was not just the speakers and their content serving as the engaging hook; the event featured live music and some original works by The International DJ Casper, along with the fact that the event was held on the roof of the majestic Kimmel Centre at sunset, ensuring an emotive and inspiring set of colours as the backdrop for learning and the perfect party scene.

This July, guests attending iTalk LA can expect to experience the same type of star power! Tickets are currently selling fast. Frank Sinatra’s mansion will serve as the backdrop for leadership development and empowerment in Los Angeles. The International DJ Casper signed to DarkChild Entertainment will be doing a live set to turn up the crowd, all culminating in a truly dope leadership-club “experience” iTalk has termed “Motivational Nightlife.”

The keynote speakers will also be cutting down there talk time to under 10 minutes to allow for better interaction with guests after speaking. iTalk provides three directives to their iTalkers Be Bold (make a strong impact), Be Brief (under10 minutes) Be Gone (get off the stage). The event also covers an array of topics all aimed at increasing those looking at self-improvement and being inspired; Courage, Vision, Change and more.

Although it’s not yet confirmed if Pratt has accepted his invitation to be a keynote speaker, it’s another testament to the enormous international reach iTalk Events attract, and the high calibre of talent their speakers have.

Ultimately, challenging attendees to: think non-traditionally, identify creative solutions to problems and share their own stories, based on their passionate why, is how Jen describes this next exciting ITalk event and the iTalk platform.

For more information go to www.italkevents.com