Art at the center of the "Universe"

Art at the center of the "Universe": the artist Cesare Catania exhibits a sculpture in white marble dust and meteorite remains during the Art Biennale in Saint Paul de Vence 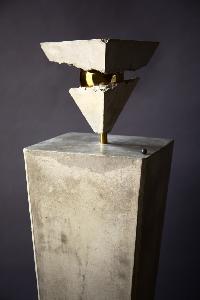 Quote:Sculpture of the italian artist Cesare Catania entitled "The Heart of the Earth - B Version"

After the resounding success on the French Riviera, the Italian artist Cesare Catania continues to amaze international critics.

Thursday 19 July 2018, during the art biennial of Saint Paul de Vence, the last sculpture of Cesare Catania, entitled "The Heart of the Earth - B Version" will be installed right at the entrance to the Provençal village. It's a sculpture of contemporary art that connects to a previous work of art in wood and acrylic made by the same artist between the years 2012 and 2015, entitled "The Heart of the Earth - A Version". The last sculpture "The Heart of the Earth - B Version" draws inspiration from the same concept of strength and energy that releases the Earth and was made of Carrara marble powder and white cement. To give even greater emphasis to the energy aspect, the artist wanted to combine the remains of a meteorite in the mixture. The origin of the latter and the historical dating of the body
from thousands of light years are controversial: the only certain data is that they are fragments belonging to the meteorite cataloged by the official bodies and by NASA as "Meteorite Gibeon", fallen in prehistoric times in the southern region of Namibia (Africa) and some pieces of which are exhibited in the most famous geology museums in the world.

In this work of art Cesare Catania wanted to concentrate all the strength of the elements considered to be of greater energetic impact: the inverted pyramide and the sphere, the marble dust coming from the Earth and the meteorite fragments coming from the Universe.

The sculpture will be installed on Thursday 19 July 2018 in the heart of Provence and in particular in the capital of world art Saint Paul de Vence, in front of the contemporary art gallery Odd Gallery.