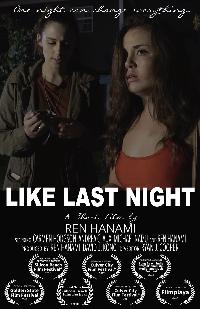 LOS ANGELES -- Filmmaker and Actress Ren Hanami has been earning awards on the festival circuit with her dramatic short film, LIKE LAST NIGHT, which tests the limits of a teenage friendship after a sexual assault. The coming-of-age film will screen next as an ‘Official Selection’ at the inaugural Golden State Film Festival in Los Angeles on August 12th and Long Beach Indie International Film Festival in late August.

LIKE LAST NIGHT follows Caroline (Carmen Hodgson) and Alex (Andrea Claux), two high school best friends with very different points of view on life, who are forced to confront what to do after one of them is raped at a party. Will the crisis tear them apart or bond them closer together?

The film earned ‘Best Coming Of Age Short’ at the 2018 Culver City Film Festival and ‘Best Short Film Supporting Actress’ for Hanami at the Silicon Beach Film Festival. In addition, the London Story First Film Festival declared: "This is a heartfelt short about a difficult topic, and is sensitively acted by the cast, including a strong performance by Director Hanami as Caroline’s mother.”

Behind the camera, Hanami has been writing and developing several original projects. She is in-development on the feature film, Ninja Mom; and the teen focused spin-off television series pilot, Fashionista Ninja. In addition, Hanami is developing the feature film she penned, Native Land, Rising Sun; a finalist in the 2018 Diverse Voices Screenplay Contest, the story follows a Japanese American girl and Native American girl who meet in the Poston Arizona Internment Camp during World War II.

A Huntington Beach, CA native, Hanami was influenced by the heritage of her Hawaiian/Japanese Mother and Scottish Father. She proudly sits as the National Chairman of the SAG-AFTRA Asian Pacific American Media Committee, which offers moral support and a forum where diverse voices can be heard.