METAPHYSICAL at the Airliner November 29th!

METAPHYSICAL dropping conscious hip-hop at the Airliner this month! Come out and check the show! Tickets online (www.myafton.com/METAPHYSICAL) r lower priced than at the doors! 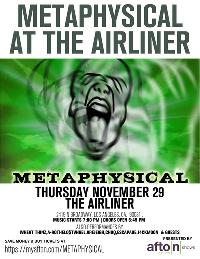 METAPHYSICAL  is featured on DJ Don D's the Funky Dope Records IL-Fated "Fire" ep vinyl release. Born in Pasadena and raised in the Central Valley (Goshen, the city of Visalia, Dinuba, the city of Tulare, the city of Reedly and the city of Hanford) of California, METAPHYSICAL a.k.a. Philip Singer, first turned 2 rhyming as a young child.
Back in the day, METAPHYSICAL was known as "Phil Fresh" An aspiring 19-year old emcee. Phil Fresh gained a following by performing in local talent shows and M.C. battles. Phil Fresh's biggest moment was getting airplay with his single, "Back In Time" on the radio station B95fm in 1990.
In 1994 a car accident put him in a coma for two weeks. Hospitalized for 6 months he had 2 relearn how 2 walk and talk again. Inspired with another chance @ life, METAPHYSICAL is now a non-fiction storytelling emcee on the lyric. The song RHYME FLOW from the "Fire" ep release is on the Lower Merion Films "Teacher of the Year" movie now on DVD.

Rude Boy Magazine, an up and coming magazine gives METAPHYSICAL a mention in the November 2014 edition(rudeboymag.com/metaphysical-mind-blowing-messages). Combining his words with precisely produced beats 2 form mind-blowing messages with songs, get your minds ready for METAPHYSICAL!
For music, music videos, downloads, artist bio and upcoming show information go to www.reverbnation.com/metap7